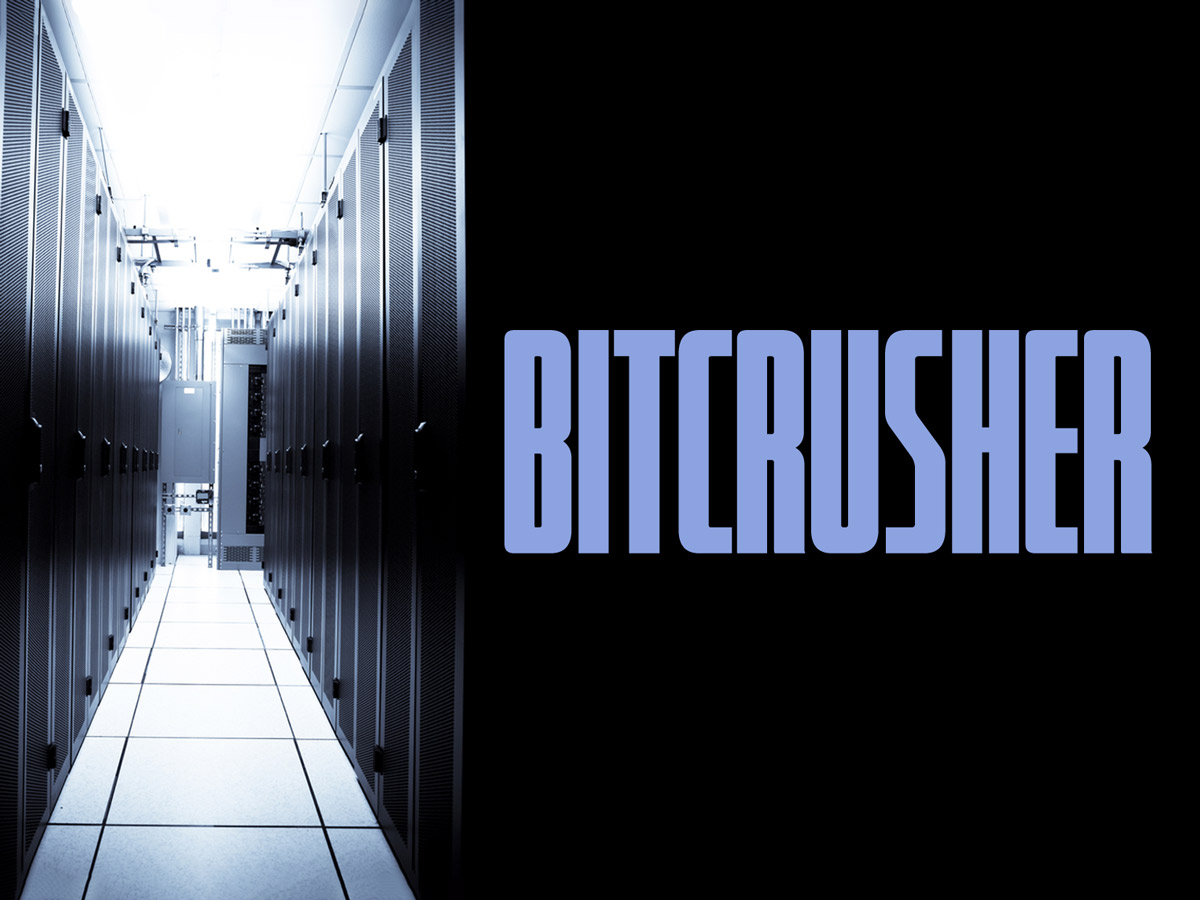 Recently, I noticed a gap in the techno font category. There are innumerable wide and normal width techno typefaces. The boxy shapes of ultramodern, square typefaces are suited to being stretched wide. But you don’t see very many compact ones. While a few ultracompact typefaces exist, a lot of them could be classified as quirky. There are design cases where an interesting typeface is the ideal choice, for example, a logotype where the curiosity of the letters is the whole appeal. But there are other situations where interesting is bad. If you’re designing a logo with an interesting symbol or logotype, you don’t want an interesting typeface to pull attention away from it. When I designed Conthrax, the goal was to make a techno typeface that was as boring as possible and I think I succeeded. Conthrax has become one my best sellers over the last few years. Bitcrusher was created with a similar purpose in mind.

The rounded corners are all tuned for maximum legibility. For example, the curve of the D is rounder than the O, and the corners are sharper than some of the other corners. But these alterations have been kept subtle because this typeface has to look techno—it’s a difficult thing to balance. In compact typefaces, width variations are more noticeable that regular or wide ones. If you have a fence with pickets 1 meter apart, it’s hard to spot a gap that’s a centimeter wider or narrower. If the pickets are close together, a small difference is easy to spot. Look at classic compacts like Alternate Gothic or Univers Thin Ultra-Condensed you can see how the stems and gaps are very regular—very accurate. With Bitcrusher, I unified the spacing and the gaps to reduce distracting differences.

Since the goal with Bitcrusher is to be boring, I needed to take an unusual approach to the relationship between stem thickness, character widths and implied weight. If you look at Condensed Heavy, you can see that there’s not much space that can be squeezed out of the gaps to compress it even further. We’ve all seen ultramegablack typefaces with razor thin gaps. Unfortunately, that would qualify as too interesting for this typeface. The widest heavy is Bitcrusher Condensed and the narrowest is Heavy Bitcrusher Crushed Heavy. Instead, the usual way it would be done, scaling narrower and thickening stems, I essentially made it taller and scaled it down.

The relationship between the weights isn’t linear. When I graphed it out, it looks more like a curved net. This gives all the heavy weights the maximum weight I could give them without making them look clogged. It keeps the regulars looking like regulars and the extra-lights looking equally light.

These days, I like to include Greek and Cyrillic support in new typefaces. While Cyrillic lends itself to compactness due to its mostly square shapes, the Greek lowercase presents a problem. Greek lowercase is constructed, traditionally with a lot of horizontal entry and exit strokes. But lucky for me, this is a techno typeface so I took the liberty of using progressive, some would say Latinized forms. Futura blazed a trail in this regard about a century ago so these forms won’t be unfamiliar to the Greek reader. There’s little point making an ultra-compact typeface and not making the accents compact as well. The bottom accents are tight to the already tight descenders and the upper accents or only a little bit looser. Vietnamese capital accents go “past the line” so you’ll need to increase leading if you’re setting text in that language.

We’ve all been told not to scale typefaces. I disagree. I think with any typeface you can get away with 3% wider and narrower and even the typeface’s designer probably wouldn’t notice. But this typeface has an industrial, boxy look and the stem width, gaps and spacing are rigidly consistent. Apply whatever kind of scaling and tracking you need to get the job done.

If you’re wondering where the name comes from: a bitcrusher the name of a digital audio distortion effect. I hope you’ll find this typeface useful. I think it’s something that logo designers, especially will find useful. So many times I found myself hand editing vectors to try to squeeze a word into a compact horizontal space in a logo or product name. If you follow the link through to Fontspring, you’ll find free demos for all 20 styles. The Condensed Bold style comes with a free commercial use desktop license. Find out more here.