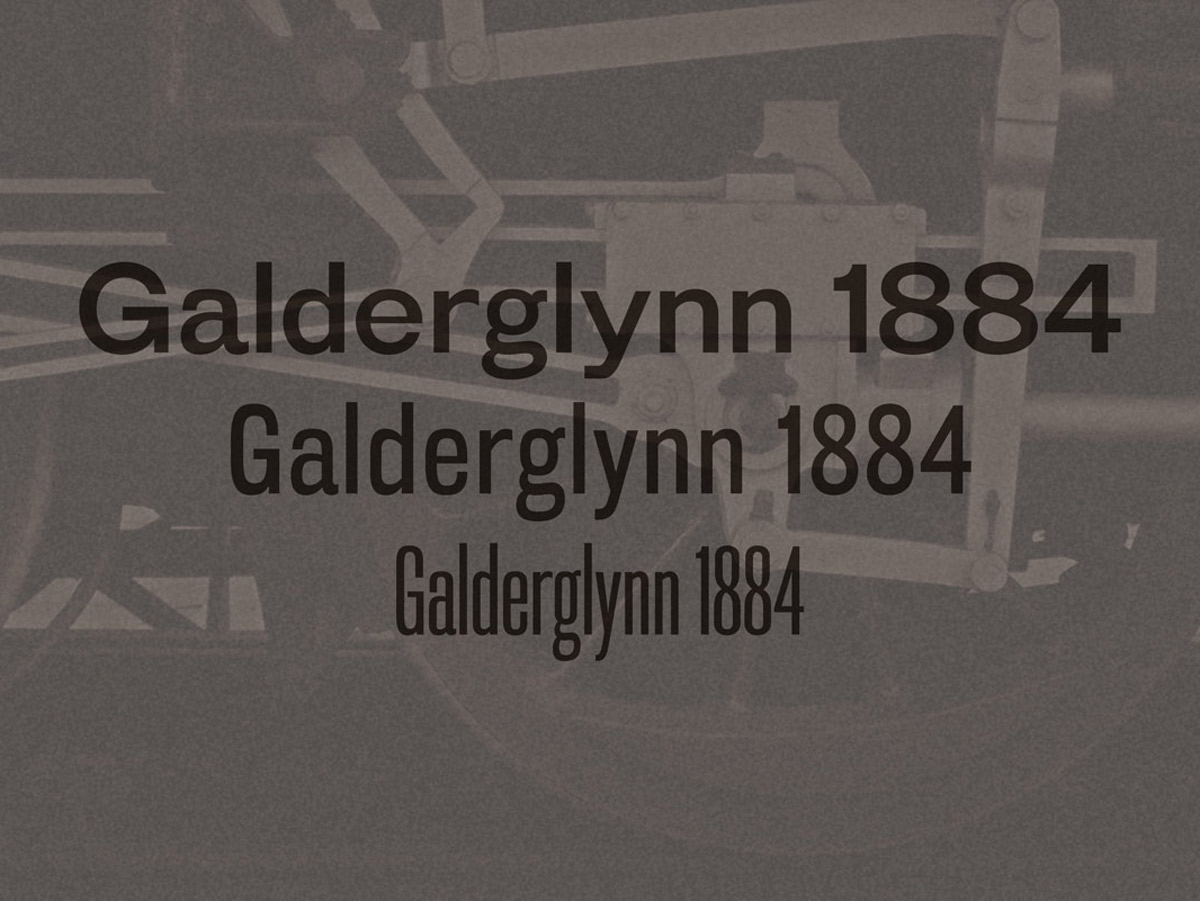 Galderglynn 1884 is a typeface project commissioned by a design team working on behalf of Jameson Whiskey. In 2013, Jameson commissioned a custom version of 2010’s Galderglynn Esquire. But Galderglynn Esquire was essentially a novelty display typeface. It was a based on a grab bag of assorted nineteenth-century sans-serif typefaces. The spacing, widths and weight of each character had a deliberate randomness to it. That’s fun when you’re doing a rustic themed layout but a bit of a pain when you’re trying to use it as a complete branding solution. A lack of condensed and extra-condensed widths. The first step in the project was to inject some refinement into the regular widths without losing the rustic flavor. Apart from addressing some hard-to-deal with quirks such as the light lowercase g and the weird numerals proportions, it was mainly an overhaul of the spacing and kerning. While I was at it, I added all the latest currency symbols and enlarged the guillemots. At first glance, there’s not much difference between the regular widths of Galderglynn 1884 and Galderglynn Esquire—it’s just easier to work with.

For the condensed and extra-compressed styles, I didn’t want to use a typical contemporary technique where there’s a linear blend from wide to narrow. In the nineteenth-century, that’s not how things worked. If you look at samples of posters and old newspaper, you can see how the narrow sans-serifs are slightly flattened and the extra-condensed styles have completely flat sides. A good example that’s closer to 1900 is Morris Fuller Benton’s sans-serifs. Bold, Light, Condensed and Extra-Condensed belonged to different typefaces: Franklin Gothic, News Gothic, Alternate Gothic and News Gothic Extra-Condensed. Even though they belonged to different typefaces, they all harmonized together. The goal with Galderglynn 1884 was to get the same kind of relationship. Galderglynn 1884 Condensed fonts share some of the same features of the regular width but the rhythm is more regimented. The sides are a bit squared off but not with an emphasis on softness. Galderglynn 1884 Extra-Condensed (Squeeze) has complete flat sides. Letter spacing and counter width is a lot more precise, because when you get tight, differences in gaps are more noticeable to the reader.

The italics are obliques. I didn’t want to go with any of the affectations used for modern “proper” sans-serif italics such as a monocular lowercase a, descending f and assorted Arrighiesque posing. That type of sans italic is more of a contemporary idea. Nineteenth-century sans serif italics were pretty much non-existent apart from a couple of examples. Most of the early sans-serif italics we know and love were produced in the early twentieth-century. One exception is a typeface from the 1890’s called Gothic Italic #124 (middle sample) or Degree Gothic #2 but that type of French style doesn’t suit Galderglynn’s American look. The extra-condensed styles don’t have obliques. Extra-Condensed obliques can get huge gaps which defeats the whole purpose of having heavy, solid text blocks in the first place. I recommend using color or weight change for emphasis.

There are no f-ligatures in the obliques. If you know my typefaces, you already know I’m not a fan of f-ligatures (fi, fl, etc,) in sans-serifs. I usually design the f to get along with its neighbors so f-ligatures would only be an affectation and distracting to readers. Since Galderglynn is old-fashioned, the design of the f really needs ligatures to get along nicely with certain letters. Galderglynn 1884’s obliques are narrower than the uprights and have extra padding in the width so f-ligatures aren’t required.

Find out more about Galderglynn 1884 here.